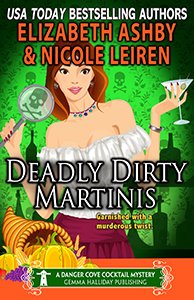 Lilly Waters is loving life as the new assistant manager at the Smugglers’ Tavern in the small town of Danger Cove. So the last thing she wants or expects is an impromptu family reunion with the wannabe-rock star dad and his number-one-fan (her mother) who were noticeably absent from her childhood. Not only does Lilly have her hands full dealing with Mom and Dad who act more like teenagers than parents, but she also finds herself in hot water when the son of a Chicago mob boss is murdered on tavern property. Now Lilly’s mom is the number one suspect, and Lilly isn’t sure where her loyalties lie.

The search for answers leads Lilly down a dangerous path where she uncovers more suspects than she can say Thanksgiving grace over—including a tattooed trouble maker, a gambler who turned against the mob, and even her own father! All their motivations prove dirtier than her signature martinis, and if Lilly doesn’t get to the truth soon, not only will dinner be ruined, but the killer may serve her up on a silver platter.